But how do you get tickets, how to get there, where to stay and what to do when you're there. Today all your Ultra Music Festival Miami questions are answered.

The festival’s inception was 1999, thanks to Russel Faibisch and Alex Omes, who named the festival after Depeche Mode, an English electronic band, more specifically, their 1997 album Ultra.

The increased length of the event resulted in a dramatic increase in its popularity, as the 2012 saw over 155,000 attendees, and the 2013 event led to over 330,000 people in attendance across two weekends to mark the festival’s 15th anniversary.

Originally, the event was held in Miami Beach, but quickly moved to Bayfront Park of downtown Miami in its third year in 2001 primarily due to the massive growth of the event from its first year to the second.

Despite its adolescence, the event quickly became a force to be reckoned with in the electronic music scene, as early as 2001 seeing powerhouse artists (at the time) like Tiesto, Robin Fox and Paul van Dyk, amongst others.

The event continued at these locations until 2019, where concerns for the local residents of Bayfront Park resulted in a further relocation in to Virginia Key Beach Park and Miami Marine Stadium.

However, the 2019 Ultra Music Festival was sorely lacking by virtue of its new location, with festival goers taking to social media to compare it negatively to the infamous Fyre Festival, citing in particular a lack of sufficient transport, and the 2020 event will see it hosted in a different location.

While it was still host to some of the hottest contemporary electronic music artists, like Armin van Buuren, deadmau5, and others, 2009 also introduced artists like The Black Eyed Peas, The Prodigy and the Ting Tings. Other more recent artists to have played at Ultra Music Festival outside of the genre are rappers such as G-Eazy, Lil Uzi Vert and Will Smith.

Like most festivals of its size and popularity, Ultra Music Festival injects significant money back into the local economy.

How Much Does UMF Miami Make?

Estimates, by the city of Miami itself, are that the festival has resulted in nearly $1 billion USD of “economic impact”, with over $168 million USD in just 2018.

The success of the event has lead to international versions of the event, titled Ultra Worldwide, with festivals taking place in countries like South Africa, Singapore, Mexico and Brazil, in addition to many others.

Evidently, the Ultra brand is one of the principal figures in the contemporary electronic music festival scene, and it has only continued to expand in size.

How To Get Tickets For Ultra Music Festival Miami?

Tickets for UMF go on sale the year before the actual festival. For the 2020 festival tickets went on sale in June. It's fair to say it's likely this will happen again next year.

Tickets are launched in four tiers with tier 1 being the early bird and biggest discounted ticket prices. Tier 2 is also fairly discounted with tier 3 being the average price. Tier 4 is the last option to buy tickets.

Tickets to the 3 day event rarely sell out (unlike Tomorrowland) and you can still purchase tickets for this years event at $399.95 online via UltraMusicFestival.com

VIP tickets almost always sell out early on with additional tickets listed closer to the time and are priced at $1499.95.

A payment plan is available for GA tickets with a $89.99 deposit.

If Ultra Music Miami tickets are sold out you can guarantee you'll find someone selling theirs on Viagogo, which offers 100% ticket protection on all sales.

VIP gives you expediated entry through a dedicated entrance avoiding the chaos that ultimately ensues on day one of Ultra for the General Admission tickets.

You get dedicated restrooms and premium bars with fewer queues. Additionally you get access to the main elevated viewing deck with views of the main stage.

Is this worth an extra $1000? For most die hard fans of Ultra they'd say so, as it can be annoying queuing for 30+ minutes every time you want a drink or use the RR.

How To Get To Ultra Music Festival?

The event is held in Miami which is a rather long flight from New Zealand. The quickest way to get to Miami is Air New Zealand's direct flight from Auckland to Houston, Texas with an onward connection with alliance partner, United Airlines to Miami, Florida.

Another option is to fly to Los Angeles, San Francisco or Chicago and again connecting with a US carrier for the last leg to Miami.

It pays to check on Google flights as you could pickup a cheaper flight by flying to Sydney first and then back to the United States as Qantas and American Airlines regularly compete against United/Air New Zealand on price.

At the time of posting this, a return flight from Auckland to Miami over the festival weekend can be purchased for $1600 - $2000 in economy.

Where To Stay For Ultra Miami?

The festival is being held in Bayfront Park, Downtown Miami. This gives you a lot of options when it comes to choosing the best hotels. Whether you want something cheap (a motel?) or something lavish, there's something for every budget. 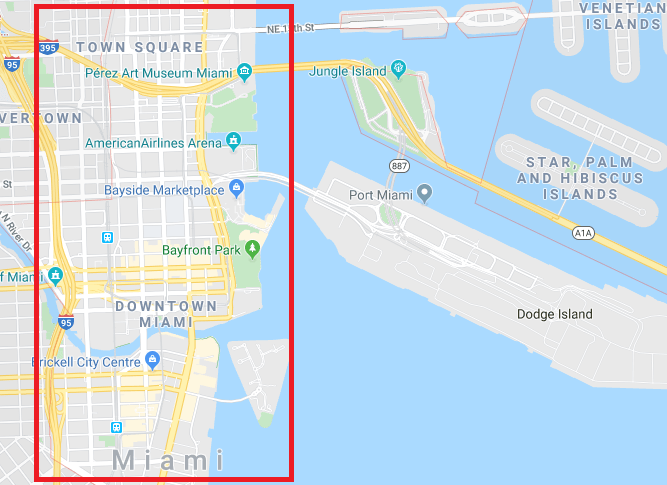 Miami is a large city so you definitely don't want to stay out in the suburbs. Getting a taxi home after the event could be expensive! Uber is well known for adding huge surges as the night comes to a close. Public transport is not reliable after dark.

You want to consider the following areas which are within walking distance:

South Beach Miami is an attractive place to stay and looks close on the map but is connected by the A1A which is long and not suitable for walking late at night.

You should book hotels early as most places put their prices up as soon as the Ultra Music dates are released. If you use Booking.com, you can book a room with free cancellation should you not end up going.

Our pick for the best hotel is EAST Miami which is highly rated and has a dope swimming pool with lavish parties and amazing bars.

Those with no budget looking for ultimate luxury should consider the Four Seasons Hotel which is one of the best in Florida. It's pricey but unforgettable.

Both these hotels are located within 500m walking distance of Ultra festival.

Another recommendation is the Mandarin Oriental, which like all their hotels around the world, offers world famous service and attention to detail.

Those on a budget should consider one of the many hostels such as Rock Hostel which is located slightly further away in South Beach, but still close enough!

Other Events To Combine With Ultra Music Festival?

You're going all that way, why not get the most out of your experience with additional music festivals and concerts.

Miami makes a big deal about Ultra and has their own week dedicated to it, called Miami Music Week which runs from the Monday before Ultra to the Sunday night when Ultra concludes and everyone disappears for another year.

Most nightclubs in Miami also put on after parties each night. Be sure to dress to impress and buy tickets online in advance to avoid hefty door charges.

One of the best things to do during Ultra Miami is hit up one of the amazing pool parties put on by promoters and various hotels.

Pool parties in Miami usually cost $20-$100 depending on the popularity of the location. Some of the best locations include:

Most of the pool parties in Miami run from 2pm until 9pm. Prices vary depending on whether you want a Cabana or not. Check Miami Music Week for pricing.

One of the best things to do in Miami during Ultra week is to hit up a party boat cruise where you can eat and drink while listening to live DJ's.

One of the most popular companies is called Magnetic Grooves who've hosted parties with the likes of Cosmic Gate, Nick Warren, Axel Boman and Danny Daze.

Tickets regularly cost $100-$150+ depending on the artist and sail around the harbour with killer bass and a bar serving up beer, spirits and wine.

For those with deep pockets and lots of friends, hosting your own party boat cruise is the perfect way to keep things going well into the evening. A few companies offer charter services but you better be quick as some boats sell out years in advance!