The Dubai World Cup is one of the richest horse races in the world and is held annually in March at the Meydan Racecourse.

But how can you watch the Dubai World Cup in New Zealand? Well today we're going to show you how you can watch live and on demand, in minutes.

What is Dubai World Cup?

The Dubai World Cup is an annual horse race for Thoroughbreds, which held its inaugural race in 1996.

It has consistently offered riders some of the highest prize pools in the world, enabling its claim as the ‘world’s richest horse race’, despite some competition offered by the Pegasus World Cup, whose 2018 race boasted $16 million.

However, it since dropped to only $9 million in 2019, and thus the 2019 Dubai Event’s $12 million regained its throne as the most expensive.

As such, the profile and reputation of the event attracts viewership and betters from people all over the world, despite its limited international broadcasting. 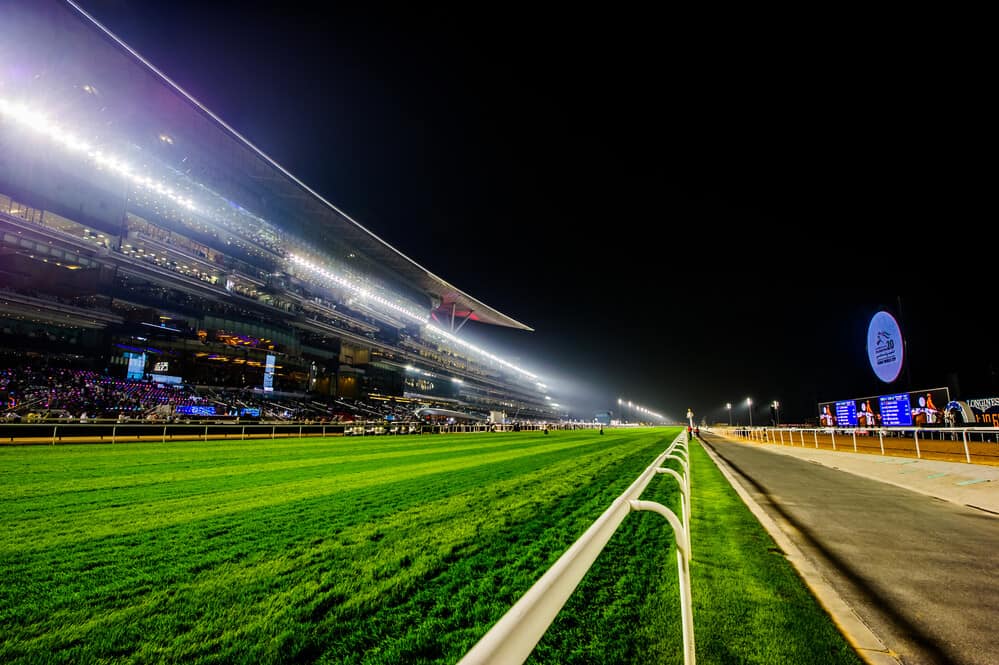 It is one of eight events encompassing what is referred to as ‘Dubai World Cup Night’, a prolific series of very expensive Thoroughbred horse races, all taking place at the famous Meydan Racecourse in Dubai, whose grandstand stretches across more than one mile and has space for over 60,000 attendees.

The World Cup Night totals $35 million USD in its prize purse and includes additional events such as the Dubai Gold Cup and UAE Derby.

The singular Dubai World Cup race is held a month after the Saudi Cup on the last Saturday of March and is the grand conclusion of the entire event and finishes roughly 2 weeks before the end of the UAE racing season.

The event is one of many ‘Group 1’ races. In Thoroughbred horse racing, events are categorised based on the quality of the competing horses and the prize pool on offer.

Naturally, this event attracts only the best horses, and as it is the richest event in the sport, certainly qualifies it as a Group 1 race. It is run across a 2km track, equating to roughly 1.2 miles on a dirt surface.

The most recent event to have concluded, as of the time of writing, was the 2019 Dubai World Cup, which took place on the 30th of March in 2019, the 24th event in its history.

The History of Dubai World Cup

The 2019 event saw an increase in its prize pool from $10 million USD to $12 million USD, with an astonishing $7.2 million USD for the winner.

There were thirteen participating horses, and the race was ultimately won by Irish-bred Thunder Snow, who was incredibly the winner of the 2018 event, making him the first horse in the race’s history to have won two events, let alone back to back. He was jockeyed by Belgian rider Christophe Soumillon, who also rode Thunder Snow to victory in the previous year’s event.

It was an incredibly close victory for the Belgian, narrowly beating out runner up Gronkowski in what is known as a ‘photo finish’, where the winner of a race cannot be gleaned simply by the naked eye, and requires a photographic examination to precisely determine who crossed the line first.

How To Watch Dubai World Cup In New Zealand?

There's no coverage of the Saudi Cup in New Zealand. It's unclear if the race will be shown live on TAB TV. If it is, you'll need a premium Sky subscription to access.

Over in Australia, the race is live streamed on Racing.com which is available to anyone with an Australian IP address and a free account.

With the help of an Australian VPN, you can set yourself up to watch this TV program as well as any other geo-blocked content.

How To Watch Dubai World Cup With a VPN?

You can watch the race using any VPN, but they must offer an Australian server. After months of research, the best VPN in our opinion is PureVPN.

Turn on the VPN by clicking the start button. Now change the country to 'Australia' and within 15-30 seconds your VPN will connect.

Your internet usage is now being routed via a server in Australia. You can now access many geo-blocked websites previously unavailable in New Zealand.

Visit Racing.com and signup for your free account. You'll now be able to live stream the race or watch on demand. You'll also be able to watch any other free to air Australian content that you previously couldn't.