Electric bikes are booming right now. Whether you're looking for something to ride around town delivering Uber Eats, help going up hills or simply to pedal further and faster than ever before, there's different electric bikes to suit every need.

The team at Ki-Wi decided to test five of the best electric bikes available to purchase in New Zealand, from budget friendly to a $10,000 powerhouse.

Even the New Zealand police are getting involved in this game changing technology.

All these models are available to purchase online with fast delivery nationwide, however should you wish take a test ride, you'll find stores across the country.

Not what you're looking for? Checkout these electric scooters instead.

All the electric bikes featured below were bought or leased by Ki-wi without financial gain for the purpose of this review.

The comments mentioned are our views based on actual use. While some products now have an affiliate link, they do not influence our reviews.

The Best Electric Bikes In NZ

With an easy step-through design built for comfort and a fold-down capability for convenient storage at work, in the car or at home the City Mini electric bike from E-Rider is hard to go past.

It’s also eco-friendly (similar to these Inokim scooters), a factor we should all be considering in how we live our lives these days.

E-bikes are a fantastic travel option because the motor kicks in as you pedal to boost your speed and reduce your effort. Alternatively, you can choose not to pedal at all and simply rely on the throttle to propel the bike at varying speeds of your choice.

Whichever you opt for breaking a sweat doesn’t often happen and that is especially important if you are going to be spending the rest of the day at work.

The City Mini is a perfect option for that daily home to work commute and is a bike which is truly unisex with an obstacle-free mounting method which suits even a woman wearing a dress or skirt.

The riding position is comfortably upright, again suiting both men and women.
The maximum speed of this bike is 30km/h and it uses a quality 36v Li-ion rechargeable Samsung battery positioned on the rear strut underneath the seat.

Its 250W motor is a Bafang brand located on the hub of the bike.

Used as a commuting bike as well as a weekend trail ride bicycle, the XTrail Advanced from E-Rider is equipped with a powerful Bafang Torque Sensored motor which gives it a top speed of over 40km/h in the right conditions.

All the features of this bike are designed for fun and adventure, with an eye to the practical as well.

As a commuter, it has an easy step-through mounting design, adjustable handlebar positions, a comfortable seat, large 26" wheels for comfortable pedalling speed, and a handy carrier on the rear wheel.

As a trail ride bike, it has a hidden heavy-duty 14aH (36v) Li-ion Samsung battery pack which provides 504Wh of energy.

The large 250W motor is positioned in the mid-section of the bike and features the previously mentioned torque sensor which enables it to produce 80Nm of torque for additional spin.

The rear and front brakes are hydraulic disc type from Tektro, and the bike has suspension on the front strut for comfort in the rough.

And the bike has a 9-speed gear system.

Other features include front and rear lights, a 5-level LCD, full fenders to avoid splashback, a bell, and thumb throttle on the handlebar. 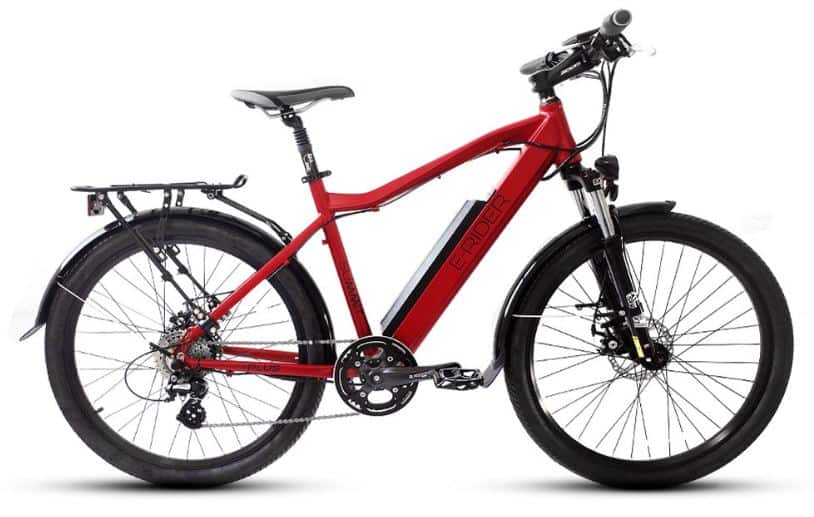 Featuring a 17” frame and 26” wheels the Summit Plus 26-inch from E-Rider is designed specifically for trail riding for men and boys.

But it can equally be used as a commuter bike to school, college or work. Switch between full motorised mode to full pedal or anywhere in between and you have the absolute in versatility.

This is a tough bike built for tough conditions. And it looks particularly striking in its Matte Red or Dark Grey finishes.

The principal technical features of the bike are its 36v 250W Bafang motor in the hub which allow it to reach speeds up to an impressive 30km/h in the right conditions.

The motor has a 12-point speed sensor, allowing you to choose 12 different speeds.

The battery is a rechargeable 36v Li-ion 375Wh from Samsung which is hidden from sight. The bike has a 7-speed gear system and Tektro brand brakes.

There are front and rear lights, a 5-level LCD interface and display, a bell, a convenient carrier on the rear wheel, full fenders on each wheel, suspension on the front strut, and a thumb throttle lever on the handlebars.

The Summit Plus is a great all-in-one electric bike for every day and/or weekend use.

The Trek 2020 Powerfly Lt 9.7 G2 is a fully integrated and sophisticated electric mountain bike which delivers everything it promises. And it promises a lot.

The design is rugged and tough, engineered to take you to the wildest of the outdoors you can find.

The bike has a Removable Integrated Battery System which enhances your balance on particularly difficult terrain. It not only hides the battery and protects it from damage, but it also gives you a place for the water bottle.

The battery can easily be removed without tools for recharging.

It also features a quality, lightweight and durable carbon frame and best of the best parts. The battery is a powerful 500Wh long-range Li-ion rechargeable one.

The motor is a super powerful Bosch Performance CX 250W drive system which is capable of delivering you speeds up to 32km/h and maintain those speeds over long periods.

The construction of the bike itself is extremely superior and includes an aesthetically pleasing OCLV Mountain Carbon main frame with Alloy stays.

More importantly, though this Carbon frame is light and fast on the trail, allowing you to sail over the lumps and bumps along the way.

It features a 160mm RockShock Yari RL fork with suspension spring. The rear extends 150mm and also has a shock absorber spring.

The wheels are tubeless so no worries about punctures and measure an extra-large 27.5” for grip and suspension. 4-piston hydraulic brakes give you super stopping power when you most need it.

And the Purion controller includes an intelligent eMTB mode which automatically determines the correct power to be delivered on the terrain encountered, keeping you and the bike safe from damage.

Designed as a commuter and travel bike, the new Giant brand Explore E+4GTS has been manufactured with only the best of materials and thoughtfully created with extra features to make all your travels on it as easy as possible.

The bike itself has a mainframe constructed from ALUXX aluminium which is both lightweight, weatherproof and durable.

It comes in four sizes: Small, Medium, Large and X-Large.

A SyncDrive Sport motor delivers a brilliant performance, including handling and acceleration, on all terrains and gradients.

The bicycle’s battery is a powerful EnergyPak Smart 500W for longer distances. It can be removed for charging.

The wheels are 28” for ease of pedalling and a smoother ride, with tyres which have a good all-weather grip.

There is a compact rubberised RideControl EVO with a user-friendly interface which makes issues such as navigation easy by syncing with your smartphone for directions and phone battery recharging.

In terms of comforts, the bike features an easy step-through mounting design. Customisable racks mean that you can change up your carrying configurations to suit your needs on any given day.

There is a water bottle rack and fittings for adding a kickstand (that doesn’t come with the bike).

There's literally hundreds of electric bikes to purchase these days. Today we've only looked at five models that we have tried and tested. Of those, you can definitely do no wrong with an e-rider branded bike such as the City Mini or X-trail.

You can spend a fortune on the best electric bikes from brands such as Giantz with some of their top end models costing upwards of $10,000.

If you're on a budget you'll want to consider less well known brands. If you don't have a budget then we're big fans of the Trek Powerfly.

Whether you're looking for something cheap to start your food delivery business or something to ride around town, or go off-road, there's various models out there.

How expensive is it to run an electric bike?

Here in New Zealand you can expect to pay between 10-15 cents to recharge your electric bike from scratch. Some models can last up to 100kmh on a single charge, so for the commuters among you, that's an entire week of use for 15 cents.

Compare that to public transport and owning an electric bike is very affordable indeed. A powerful model with low battery capability could add up and be quite expensive over the course of a year.

You'll probably want to service your bike at least once per year, this can cost anywhere from $100 to $200 depending on the store.

Battery replacements are rare but cheaper models will likely require a new battery after 3-4 years while advanced models should last up to 10 years.

Like any technology you could experience a battery issue at any time so getting a bike with a good warranty plan is another smart idea.

The costs of owning an electric bike are similar to a normal bicycle, the only caveat is the electricity cost. Fortunately in a country like New Zealand, electricity is still quite affordable for most people.

How much do electric bikes cost?

Most bikes have the same top speed, around 30-40km/h. Some bikes can easily do this on a smaller 250W motor, while others like off-road bikes require bigger motors to get to the same speeds.

Larger motors will most definitely have more torque so if you want to get from 0 to 30 faster you'll want to buy an electric bike with a large motor.

Often more expensive electric bikes come with more advanced technology, such as Shimano gears vs generic gears. Often they'll have stronger and lighter frames, perfect for zipping around the city.

You can nearly always buy an electric bike on finance through various eCommerce providers. Most common is Afterpay which allows you to pay over 4 installments. Others include Gem Finance and Paypal credit.

Be sure to ensure your electric bike comes with a warranty that's valid in New Zealand. You don't want to be left high and dry if a repair is needed.

How to repair an electric bike?

The thought of an electric bike sounds great but unlike a traditional bike, you can't take it to any bike shop and get it fixed. Most bike shops don't have the skills or parts catalogue to fix such problems.

You should firstly contact the store you purchased from. They will likely carry spare parts which you can replace yourself. The main components to an electric bike are pretty standard. If your bike requires servicing they can arrange a local technician that can assist, or help you return the bike to them.

Most electric bikes come with a one year warranty on major components, so don't be afraid of purchasing one.

Do you need a license to ride one?

Currently you do not need a license to ride an electric bike on the road. The same rules apply as for bicycles. You don't need rego, insurance or a drivers license.

As it's an electric bicycle, there is no registration required.

The NZTA has further information on this game changing innovation.